In this article we’ll describe how to design and build explainable machine learning models with ML.NET. We used a UWP app to host these models, and OxyPlot to create the diagrams to visualize the importance of features for a model and/or a prediction.

We will discuss the following three tasks that you can execute with the ML.NET Explainability API:

The two corresponding pages it the UWP sample app look like this:

In many Machine Learning scenarios it is not only important to have a model that is accurate enough, but also to have one that is interpretable. In Health Care or Finance, models should be transparent enough to explain why they made a particular prediction. Conclusions like “You are 75% healthy” or “Your loan application was not approved” may require a better excuse than “because the computer says so”. Model explainability –knowing the importance of its features- is not only useful in justifying predictions, but also in refining the model itself – through feature selection. Investigating explainability allows you to remove features that are not significant for a model, so that you probably end up with shorter training times and less resource intensive prediction making.

The code in this article is built around the 11-features white wine quality dataset that we already covered several times in this article series. We solved it as a binary classification problem and as a multiclass classification problem for AutoML. This time we finally approach it the correct way: as a regression problem where the outcome is a (continuous) numerical value – the score– within a range. We’ll use an Stochastic Dual Coordinate Ascent regression trainer as the core of the model pipeline. Let’s first build and train that model.

Here’s the class to store the input data:

As in any ML.NET scenario we need to instantiate an MLContext:

Here’s the code to build and train the model. We’ll refine it later in several ways to enhance its explainability:

Which features are hot, and which are not

Machine Learning has several techniques for calculating how important features are in explaining/justifying the prediction. When your main algorithm is a linear classifier (e.g. linear regression) then it’s relatively easy to calculate feature contributions. The prediction is the linear combination of the features values, weighted by the model coefficients. So at model level there’s already a notion of feature contribution. In ML.NET these Weights are found in the LinearModelParameters class. This is the base class for all linear model parameter classes, like LinearRegressionModelParameters (used by SDCA) and OlsModelParameters (used by the Ordinary Least Squares trainer).

For any linear model, you can fetch the overall feature weights like this:

Here’s how the weights for the wine quality model look like in a diagram:

The alcohol feature seems to dominate this particular model. Its weight is positive: a higher alcohol percentage results in a higher appreciation score. We may have just scientifically proven that alcohol is important in wine quality perception. In other news there are also at least three characteristics that could be ignored in this model – and maybe up to seven.

A second component in ML.NET’s Explainability API is a calculator that computes the list of feature contributions for a specific prediction: the FeatureContributionCalculator. Just like the overall feature weights from the previous section, the calculated feature contributions can be positive or negative. The calculator works for a large number of regression, binary classification, and ranking algorithms. The documentation page on the FeatureContributionCalculatingEstimator class contains a list of all compatible trainers. It includes

Thanks to ML.NET’s modular approach it’s easy to plug a feature contribution calculator into a model pipeline, even if the model is already trained. Here’s how we did this in the sample app.

First we extended the prediction data structure (which originally had only the Score) with an array to hold the contribution values for each feature:

Using the CalculateFeatureContribution() method we created and estimator, and trained it on just one input sample to become a transformer. This adds the calculation to the pipeline and the feature contributions to the output schema. The transformer was then appended to the trained model.

For testing the model, we didn’t dare to bother you with an input form for 11 features. Instead we added a button that randomly fetches one of the almost 4000 training samples and calculates the score and feature contributions for that sample.

Here’s the code behind this button:

Feature Contribution Calculation also works for models that don’t come with overall weights. Here’s how the results look like for a LightGBM regression trainer – one of the decision tree based algorithms:

Check the comments in the sample app source code for its details. Also in comments, is the code for using an Ordinary Least Squares linear regression trainer. This 18th century algorithm is one is even more biased towards alcohol than our initial SDCA trainer.

For yet another example, check this official sample that adds explainability to a model covering the classic Taxi Fare Prediction scenario.

The last calculator in the ML.NET Explainability API is the most computationally expensive one. It calculates the Permutation Feature Importance (PFI). Here’s how PFI calculation works:

In ML.NET you fire up this process with a call to the PermutationFeatureImportance() method. You need to provide the model, the baseline data set, and the number of permutations – i.e. the number of feature values to replace:

We defined a data structure to hold the result:

The list of feature importances is created from the result of the call and visualized in a diagram. Since we decided that R Squared is the main quality metric for our model, we used RSquared.Mean (the mean decrease in R Squared during the calculation) as the target value for feature importance:

We used the same regression algorithm –SDCA- as in the previous samples, so the addiction to alcohol (the feature!) should not come as a surprise anymore.

Here’s a detailed view on one of the metric statistics when debugging: 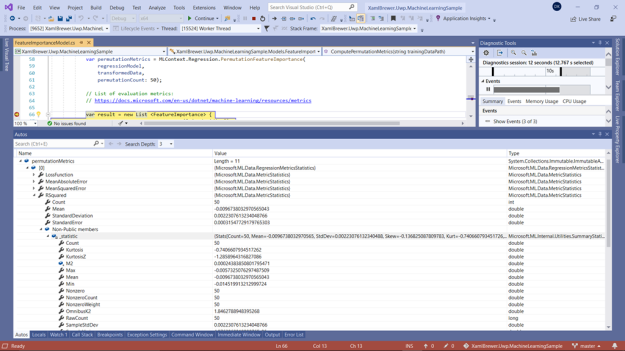 That is an awful lot of information. Unfortunately the current API keeps most of the details private – well, you can always use Reflection. Access to more details would allow us to create more insightful diagrams like this one (source). It does not only show the mean, but also min and max values during the calculation:

In this article we described three components of the ML.NET Explainability API that may help you to create machine learning models that have the ability clarify their predictions. The UWP sample app hosts many more ML.NET scenario’s. It lives here on GitHub.